Devolution and the Supreme Court

I see the sacred destiny of the United States as becoming an increasingly inclusive, multicultural nation. It is not united by sameness, which is how fascist dictatorships operate, but through unity in diversity. Overall, I remain optimistic that: “The arc of the moral universe is long, but it bends toward justice,” as the 19th century transcendentalist Theodore Parker said (and Martin Luther King and Barack Obama liked to reiterate). However, there have always been periodic times of backlash against progress, what I called in my book Original Politics “devolution.” In these times, it appears that the nation is going backwards. This is definitely one of those times.

The Supreme Court appointees of Donald Trump are not the cause of all that ails the United States. However, Donald Trump has been a catalyst for revealing the American shadow. This is all coming out now, with the three Trump/McConnell appointees of SCOTUS trying, in a reactionary way, to re-litigate the entire history of the nation. The specious logic of the Alito opinion, attempting to justify the reversal of Roe by saying that abortion is not deeply rooted in our nation’s history, ignores the fact that it had been settled law for more than 1/5 the time the United States has been a nation. 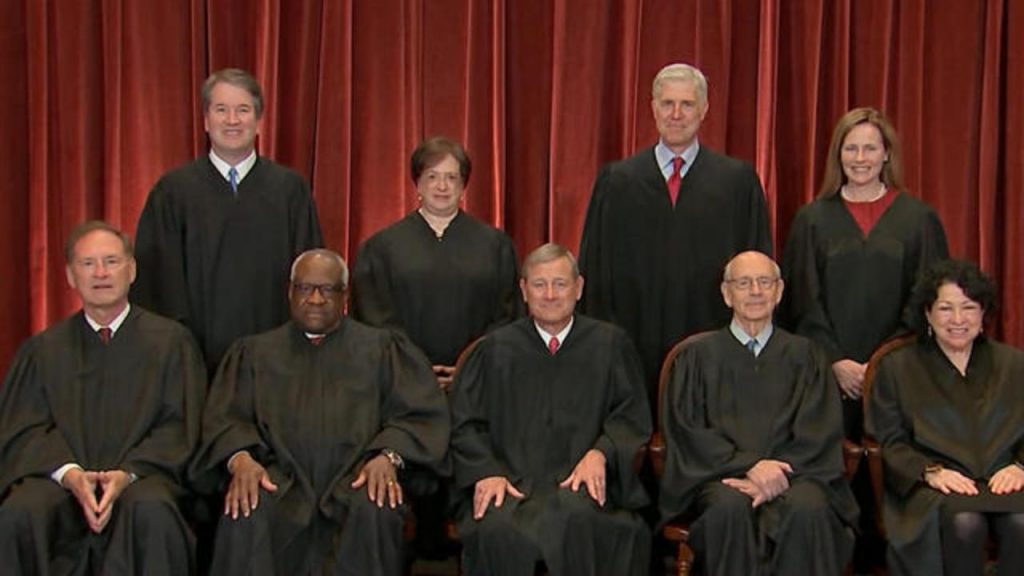 The Court is acting in a dangerously arrogant way, for the first time stripping away rights rather than granting further rights. Alito couched his opinion in legal mumbo jumbo, saying he was returning proper authority to the states. This was done one day after wresting authority away from NY State for daring to regulate the legality of carrying concealed firearms. The hypocrisy is profound. Then, the very next day the Court blatantly disregarded a bedrock principle of separation of church and state by allowing a teacher to lead his students in prayer in school. The sum total of these rulings is a dangerous slide toward becoming a Christian theocracy under the false pretenses of defending religious freedom and state’s rights. Returning a hot button issue like abortion to individual states is reminiscent of slavery pre-Civil War. This poorly thought out action will have the effect of further dividing the nation and destabilizing the union. It could lead to even more civil strife.

One simple fact any reasonable person should be able to agree upon is that the issue of abortion is viewed differently by different people and by differing religions and schools of thought. Jews, for instance, believe that the health of the mother is paramount in any decision about pregnancy. To impose a Christian, or a Catholic (with a capital C) way of viewing is to move in the direction of a Christian theocracy. The other obvious fact we should all be able to agree upon is that we are all born from a woman’s body. And it is undeniably her body. This is the primary reason why Roe was decided the way it was, from the standpoint of a privacy issue as outlined in the 14th Amendment. It was a woman’s right to choose whether or not she carried a pregnancy to term and gave birth. The choice of whether or not to bear a child is obviously a profound one. This Supreme Court claims it is returning the decision from the courts to the people, but under Roe, the decision was already with the pregnant woman and now it’s with the state (and different depending upon which state one lives in).

Frankly, I would have had more respect for the Alito opinion if he had just come out and said the majority of Justices thought that life began at conception and abortion was murder. I am not saying I agree with that point of view; I have a more nuanced view I will get to in a moment. But I would have at least respected it. Instead, they claimed to be removing the Court from the decision when they were doing anything but. They chose to overturn precedent upon precedent for no legally justifiable reason at all.  The majority opinion is justified by asserting that abortion was not rooted in the nation’s history from the start. Well, neither were any rights for women, including the right to participate in any part of the political process. Nor were there any rights for African-Americans, who were deemed to be three-fifths of a person under the Constitution, with many enslaved as property. Women did not receive the right to vote across the nation until 1920; Native Americans did not receive citizenship until 1924; interracial marriage was not deemed legal until 1967 with Loving vs Virginia case, abortion became legal in 1973 in Roe v Wade; and same sex marriage became legal in 2015 in Obergfell vs Hodges.

The concept of “originalism” is deeply and transparently flawed. I say this as the author of a book called Original Thinking in which I state that being original has a dual meaning, as in both old and new. In my view, tradition and precedent should have a role in interpreting modern law; however, to interpret modern laws solely based on archaic concepts is nonsensical. Values, mores, and beliefs change over time. The Supreme Court should reflect the will of the people and changing social mores over time, and not try to impose its will, or the imagined views of the founders, upon the people at any time.

What Happens to the Soul when an Abortion Occurs?

My own sense of what happens when an abortion occurs is that a soul that intended to be born has its path blocked, but then reincarnates with another host. To me that helps dissolve the dichotomy in which people tend to argue about the issue. I realize that a belief in reincarnation is relatively rare in the West, although much of the world believes in it. I have reason to believe in reincarnation, and I don’t need to go into the full details of why here—but if you are open-minded to the subject, I would point to Matlock’s Signs of Reincarnation with Foreword by Jeffrey Mishlove for more on that.

Even if you believe abortion is a form of ‘killing’ – it is cessation of life within one’s own physical body. I have news for some people. Every time you ingest antibiotics (the very word means “anti-life”), you are killing millions upon millions of bacteria you depend upon to live. Every time we eat we are either taking the life of an animal or a living plant, bird, fish, and so forth. The act of living involves and includes death within its processes. This happens to be one of the reasons I believe in reincarnation. I see death as a reorganization of energetic force. As Einstein realized, energy cannot be created or destroyed; it can only be transformed. Death is nature’s way of transforming and supporting new life.

What Can Be Done?

I feel for the women of America today. The entire society depends so much on women to make this a better world. It is not just that women make babies and nurture them; the feminine power of creation has her footprints upon everything that makes this world a beautiful place to live. It is not a coincidence that women’s knowledge was considered the wisest, foremost knowledge among many Indigenous peoples, including the Haudenosaunee (Iroquois) from which much of our nation’s egalitarian ideals were selectively appropriated. Among the Haudenosaunee, it was the Clan Mothers who made the most important decisions: to sign treaties, go to war, and to nominate the male chief, while also retaining the power to call a Grand Council and weigh in with their guidance if a course correction was needed. The Clan Mothers also retained the right to remove the male chief if he committed acts of malfeasance, including acts of disrespect toward women.

So what can be done about the recent Supreme Court decisions, particularly around abortion?

Fifty years ago, Betty Friedan organized The Women’s Strike for Equality in the United States. At that time, the organizers stated three goals: abortion on demand, equal opportunity in the workplace, and free childcare. The first goal was met fairly quickly in 1973. The second and third goals continue to lag behind. 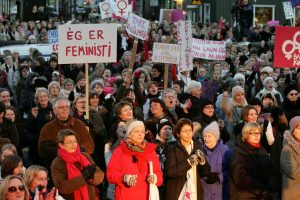 I also remember that 40 years ago, in Iceland, the women of Iceland went on strike for a day. They refused to work, cook, and look after children for a day. I imagine they also refused to have sex that day (a la the Greek play Lysistrata) although I have never read that. Well, maybe US women should do the same thing, and for a longer period if necessary. The one-day strike of Iceland resulted in entire industries shut down and an immediate awareness of the fact that women were pillars of the society at least as equally as men. While things went “back to normal” the next day, within a short time, the society was transformed. Women began receiving paid maternal leave, which led to the nation welcoming their first female prime minister (something the United States has yet to do for our president).

I stand with all women who want to do something similar in the United States that will draw attention to their vital importance in society, and undo the damage that been done by this Supreme Court. I believe that this is a temporary backlash against women’s rights, a last stand from the old guard of masculine dominance, and that feminine power will continue to emerge and rise in prominence, just as has been foretold in Mayan and other prophecies of this age. I pray for and welcome that day where equal justice under the law prevails for all.

Originally published at KOSMOS: A journal for Global Transformation