Fees: $575 (includes all meals and accommodations) 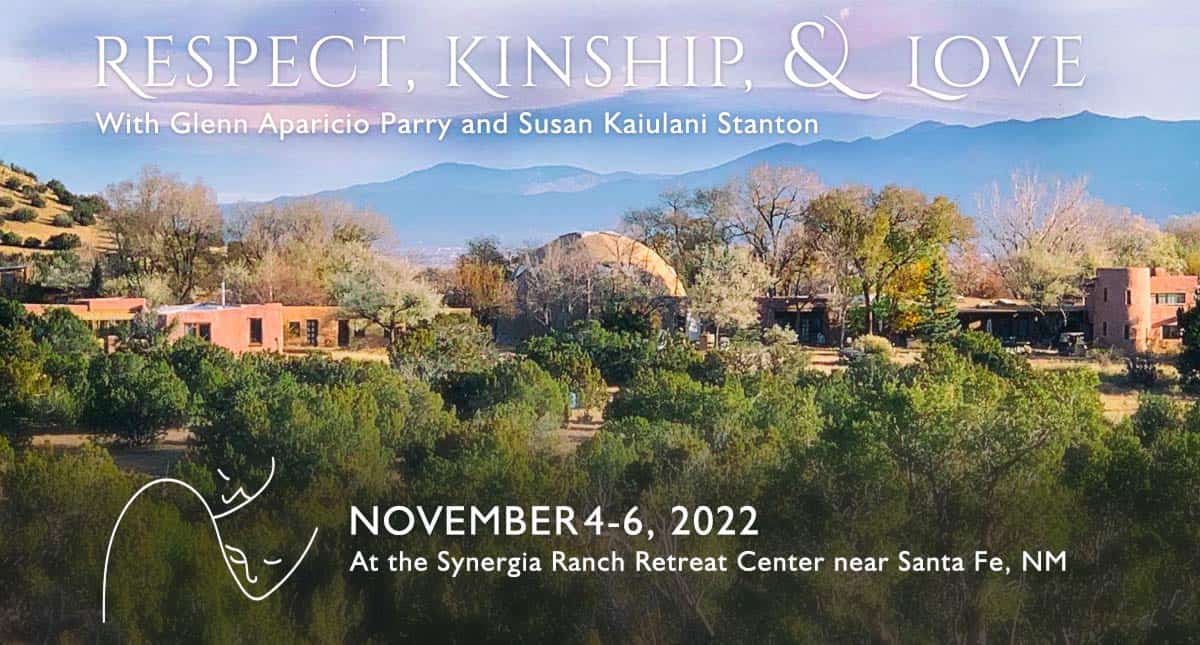 When the East Indian sage Ramana Maharshi was asked, “How should we treat others?” he replied, “There are no others.” From the perspective of the sage, the universe is one being. For similar reasons, the words respect, kinship, and love are basically synonymous in Indigenous cultures. The cosmos is understood to be radically interconnected, comprised of “all my relations.”

Western mainstream cultures, on the other hand, have tended to see the natural world as other, separate from self. Even romantic partners are spoken of as “significant others.” Such a worldview not only inhibits mystical union between lovers; it restricts the concept of kinship to blood relations. Nature is not kin, but “it,” not animate and alive, but inert. As Dan Moonhawk Alford once lamented, “Mother Earth has been ‘itted’ to death.”

This retreat seeks to recover what we lost when we deadened our relationship with the earth and with our fellow humans. We utilize dialogue and ceremony to facilitate speaking from the heart. We listen to each other for the purpose of understanding, not to debate or prove our own point. Our goal is not merely to talk about respect, kinship, and love, but to embody it in our hearts, transforming how we see the world and our sacred role in it.

Synergia Ranch has been a center of innovation since 1969. Home to the original creators and designers of the Biosphere 2 Project in Oracle, AZ, the ranch is located 25-30 minutes from downtown Santa Fe and about 45 minutes from Albuquerque airport. Set on 111 acres of high desert prairie dotted with piñon and juniper trees, the name of the ranch is inspired by Buckminster Fuller. There is a geodesic dome on the property as well as an organic farm. Synergia Ranch is also the home of Synergetic Press, specializing in evolving planetary consciousness, with breakthrough books in ecology, sustainability, and plant medicine.

Glenn Aparicio Parry, PhD, of Basque, Aragon Spanish, and Jewish descent, is an educator, ecopsychologist, and two-time Nautilus award winning author of Original Politics: Making America Sacred Again (SelectBooks, 2020) and Original Thinking: A Radical Revisioning of Time, Humanity, and Nature (North Atlantic Press, 2015) and is currently writing Original Love, the third book in the trilogy. The founder and past president of the SEED Institute, Parry is currently an adjunct faculty member of the California Institute of Integral Studies, the president of the think tank: Circle for Original Thinking  and the host of the Circle for Original Thinking podcast. Parry organized and participated in the groundbreaking Language of Spirit Conferences from 1999 – 2011 that brought together Native and Western scientists in dialogue, moderated by Leroy Little Bear. Parry now regularly moderates dialogues for various organizations and has appeared in several documentaries, including SEEDing Change: A Retrospective of the Language of Spirit Dialogues and Journeying to Turtle Island, a biographic film exploring David Peat’s life and participation in the dialogue circles by Spanish filmmaker Miryam Servet. He is an avid outdoorsman who enjoys hiking and fly fishing. He writes from a fairly remote location in northern New Mexico, where he lives amid wild horses, coyote and mountain lion with his wife Tomoko, dog Momo, and cat Cappuccino.

Susan Kaiulani Stanton (Haudenosaunee/Native Hawaiian) is the Founder and Senior Grandmother of Grandmothers Circle the Earth Foundation, an international organization that travels the world in service of Mother Earth and future generations, giving birth to new Grandmother councils all over the planet. Susan is Vice-President of the Great Balance, bi-located in the United States and Colombia with a focus on building a culturally appropriate university and the planting of one million trees to protect and perpetuate the culture and sacred land of the Mamos, the Indigenous People of the beautiful Sierra Nevada de Santa Marta mountains. She is a delegate with the International Public Policy Institute to the United Nations Commission on the Status of Women, and has also participated in United Nations forums on Indigenous rights. Susan lives with her husband Brad Walking Bear Stanton (Narragansett) on the Mississippi River in the heartland of North America.