Original Thinking: A Radical Revisioning of Time, Humanity, and Nature

Five hundred years after Columbus came to the American continent, a series of historic dialogues began between Native American elders and leading-edge Western scientists exploring the underlying principles of the cosmos. From 1999-2011, the author organized and participated in thirteen of these groundbreaking dialogues, held annually, in Albuquerque, New Mexico. 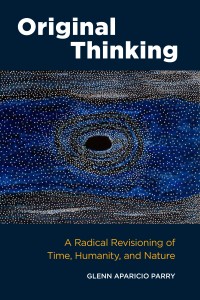 Inspired by these dialogues, Original Thinking unfolds in a similar way to a dialogue circle. Unlike most non-fiction books, it begins with and is centered around questions. These questions penetrate ever deepening layers of meaning, starting with: “Is it possible to come up with an original thought?”—then going on to consider “What does it mean to be human;” “How has our thinking created our world today;” and more. It delves into the evolution of Western thought not for sentimental reasons, but to recover the living roots of wisdom that can correct the imbalances in our modern worldview.

It is significant that the very word “original” once referred to origin—or place—but now means the beginning of time, at least for Western peoples. The consequences of time usurping place are devastating. Both time and place have become abstractions. And so has thought. To think was once “to thank” and “to feel” because our thinking originally celebrated the connection of the human soul to the world soul—the anima mundi. Now our thinking is something we seemingly do all by ourselves, apart from living nature. It is no wonder we keep destroying the ecology, both consciously and unconsciously.

“Parry’s book is perhaps the bravest and the most effective means to reeducate ourselves to the luminous life of the undivided consciousness. If widely read, this potent work can have the most profound consequences in restoring us to the soul of the world and the world of soulful, natural living.”
—Jean Houston, NY Times best selling author of The Wizard of Us

“We have arrived at a critical time for the human race, one that calls for something radically new. Original Thinking is such a book, one that maps out an exciting new path for us to take together.”
—F. David Peat, author of Blackfoot Physics

“Parry reminds us humans that it is within our capacity to recover our relationship with Nature and all her Beings. We must act now.”
—GRANDMOTHER FLORDEMAYO (Mayan), member of International Council of Thirteen Indigenous Grandmothers

“For over a decade, Glenn Aparicio Parry has been convening a unique gathering of minds, bringing a distinguished array of indigenous wisdom keepers together with western scientists—not to hold forth in front of an audience but simply to be in rich dialogue with one another, listening, learning, discovering fresh ways of thinking and understanding our aching world. A creative and heartfelt educator, Parry here dips deep into the wellspring of these conversations, pooling the insights he’s gleaned and looking through those waters toward a new form of education.”
—DAVID ABRAM, author of The Spell of the Sensuous

“The heart of Parry’s journey taps the living pulse of sacred, deep dialogue and calls upon the reader to become an awakened, ‘original’ reader, entering a sacred rite of passage toward the whole Self, heart and soul.”
—Ashok Gangadean, PhD, author of Awakening the Global Mind

“One of the more upfront, truthful accounts I have read. It speaks to the truth of what actually happened, and is still happening today.”
—Jerry Honawa, Hopi elder

“Original Thinking invites you to re-experience your own ground of being and your relationship to Cosmos not as an informational retrieval process but as a profound journey of discovery.”
— James O’Dea, author of The Conscious Activist and former president of the Institute of Noetic Sciences

“Parry has deftly removed egotistical consciousness from its putative mastery of things and reinserted it integrally back into nature, and in doing so everything—thought, time, space, humanity—comes to look different, more radiant, at once older and newer. [This] is even more than a prescription for restoring the world.… In the pages of Original Thinking the world is already healthy once more.”
—JEFFREY PAINE, author of Re-Enchantment

“Parry’s gift is to bring out the core essence of humanity, love, and prayer as well as our infinite connection to nature.“
—Harlan MCKosato (Sac and Fox), host of Native America Calling

Glenn Parry’s ambitious new book excavates the roots of our cultural pathologies (born of habits of thought ensconced in custom, and language) in a way at once accessible and profound. He takes the reader on a journey into the unconscious assumptions that undergird the map of “reality” that modern, industrialized societies take for granted. And the map is not the territory as Parry so aptly illustrates: there is a lot of rich terrain to explore in the “third space” opened by the decade-long dialogue between indigenous elders and scientists that inspired this work. As one of the long-time participants who was personally transformed, I am delighted by how the book distills some of the wisdom, and burning questions, that were forged in our historic dialogues. And I am even more heartened by Parry’s ability to translate that wisdom into practical solutions and actions, especially in the realm of education, which he covers in some depth.  Parry’s volume is calling out to anyone who is inspired by a vision of an “ancient future.”
—MATTHEW C. BRONSON, PhD, coeditor of So What? Now What? The Anthropology of Consciousness Responds to a World in Crisis

“Original Thinking is a call for humanity to return to our original purpose in the cosmos. Asking the most basic questions, Parry challenges us to set aside conventional thinking and ponder life’s firsts as blessings for which to be thankful—the first thought, the first awareness, the first consciousness, the beginning of the cosmos—in order to reeducate our minds, become one with nature as a state of being, and achieve wholeness through Spirit as our source.”
—PHILLIP H. DURAN (Tigua) author of The Condor and the Eagle

“Read this book and be liberated from the selfish, greedy, egotistic, and separatist thinking that is currently dominating and destroying our planet. Learn how to return to the origin of thought which brings us back into synchronization with Nature. It isn’t hard. Parry provides excellent instructions.”
—CAROLE HART, producer and director of For the Next Seven Generations: 13 Indigenous Grandmothers Weaving a World that Works

“A brave and bold book that draws upon the power of ancient wisdom, ways of being in the world still rooted to a vibrant sense of the ‘whole’—the whole of nature, the whole of humanity, the whole of time. Here is a book that we actually need to read, for our sake and the sake of life on this planet. For those willing to risk thinking their way toward viable and necessary alternatives to the dominant pressures of globalized capitalism, for those aware of the drastic consequences of our ignorance of the spiritual in favor of a selfish materialism, this book is not simply a treasure. It may be the one guide we need to begin to sort out how we might yet save ourselves.”
—MARK S. BURROWS, coauthor of Minding the Spirit

“Original Thinking has to do with the movement between civilizations, between cultures, between languages, between worlds. It has to do with overcoming boundaries, crossing borders not only geographically—but also psychologically and spiritually—in communication, in thinking, and in identity. It means that one is never finished, that one is always journeying onward. That one is always ready for the next experience.”
—GRANDMOTHER MONA POLACCA, (Havasupai/Hopi/Tewa), member of International Council of Thirteen Indigenous Grandmothers

“Reading Original Thinking felt like being stirred and mixed and rocked in a cradle between my left brain and my right brain. And I do suspect that there was an interconnecting subtle weaving process stitching together an even more supple fabric within my whole brain. And that this fabric that re-wove me into it re-wove me into the original memory of Wholeness of all of Creation.”
—VICTORIA HANCHIN, author of The Seer and The Sayer