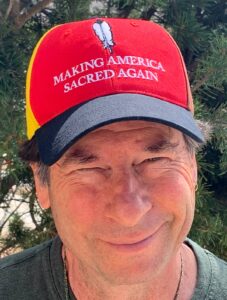 You can find the original MASA Hat representing 5 colors of humanity and also a turquoise version of the hat in the OriginalThinking.us store.

The subtitle of my book Original Politics is Making America Sacred Again. People often ask “why the subtititle?” Now, they are asking, “Why the hat?” To find out the full reason, I recommend you read the book. However, the brief answer is as follows:

The subtitle of the book (on the front of the hat) refers to both the nation known as America and to the land, originally known as Turtle island. The land, and the way people interacted with everything on the land, including other humans, was once considered sacred. The values Americans now cherish: liberty, equality, and natural rights, were values that were sacred to Native America and greatly influenced the nation’s founding fathers.

The word sacred comes from the Latin sacare, meaning to “devote” or “dedicate.” To be sacred means to invoke the whole; and to be whole is to be healthy.

The design of the hat also merits some explanation. At the inception of the United States, only white, male property owners had the right to vote. The motto on the Great Seal of the United States: E Pluribus Unum (From the Many, One) is a beautiful seed idea, but one that has yet to be realized. In the book Original Politics, I identify the sacred purpose of America as unity in diversity. The concept of unity in diversity is behind the creation of the MASA Hat. It is why the original MASA hat is five-colored, representing the five colors of humanity. Moreover, “MASA” means cornmeal in Spanish, and cornmeal is a common offering given in prayer, particularly among Native Americans. It is our prayer that the United States of America become an increasingly inclusive nation worthy of the motto E Pluribus Unum. The book Original Politics: Making America Sacred Again and the creation of this hat are our humble contributions to doing so. 100% of the net proceeds from sales of these hats will go directly to helping the Navajo Nation. Please help to the extent you are able. May you and your family be safe and healthy. And may your kindnesses be blessed many times over.